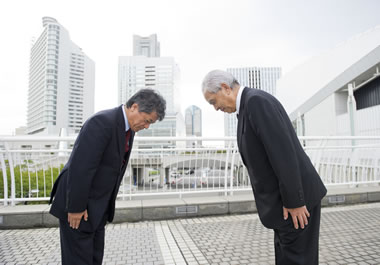 The men are showing respect to one another.
Learner's definition of RESPECT

1 : a feeling of admiring someone or something that is good, valuable, important, etc.

2 : a feeling or understanding that someone or something is important, serious, etc., and should be treated in an appropriate way

3 [count] : a particular way of thinking about or looking at something

4 respects [plural] : a polite greeting or expression of kind feelings

with (all) (due) respect